​Communist Bosses Won’t Even Allow Book Inside The Country

The worldwide release of an American book on cannabis has been delayed, due to the refusal of the communist government of China to allow its binding on Chinese soil, according to the publisher.
The Little Black Book of Marijuana, by yours truly, Toke of the Town editor Steve Elliott, was scheduled for availability on August 1, but that printing schedule was thrown off after the totalitarian Chinese government decided the book was “too controversial” to even allow the printed pages inside the tightly-run dictatorship.
“Our printer is located in Hong Kong, with binderies in mainland China,” production manager Ginny Reynolds of Peter Pauper Press explained to me Friday morning. “Usually it’s no problem to move printed books from Hong Kong to China for binding.
“However, Chinese censorship is extremely tight,” Reynolds told Toke of the Town. “Any content deemed ‘sensitive’ or ‘controversial’ by their standards is banned.”
Read More

​You don’t have to wait for Toke of the Town editor Steve Elliott’s upcoming hardcover book on marijuana to be printed in August before you read it.

The Little Black Book of Marijuana: The Essential Guide to the World of Cannabis is now available in electronic form as an e-book for just $3.95.
The concise, small-format guide to cannabis delves into pot culture and history, from Herodotus to the hippies and beyond. It also covers the essentials of using, cultivating, and cooking with weed; identifying pot varieties; and understanding legal and health issues.
Handy and to-the-point, The Little Black Book of Marijuana is your quick reference for cannabis history, issues around legalization, and where to go from here.
“When Peter Pauper Press first asked me, back in the autumn of 2010, to write the book, I jumped at the chance,” Elliott said. “Even within the Little Black Book format’s space constraints of 20,000 words, I knew this was too important an opportunity to pass up, and over the next few months I worked to distill the essence of cannabis culture and history down into its most concentrated form, like the finest hash oil.
Read More

​Enjoy Jars are new cannabis containers designed to help medical marijuana patients organize up to five different strains of medicine. Made in Orange County, California out of a lightweight, high-performance polycarbonate, Enjoy Jars have four individual sections, all sealed, which trap that familiar skunky smell.

“Label each section with a Sharpie marker and let dry for a few seconds,” Enjoy Jars advises. “When it’s time for a new strain, simply wipe off with rubbing alcohol and write in a new name.”
The innovative lid individually seals each section to ensure that the contents remain isolated and maintain their unique smell and flavor. The contents of each of the four sections will not mix with each other.
The small Nugtainer, which comes with each Enjoy Jar, is perfect for those times when you have a nug in your pocket but don’t want it collecting any lint — and it doubles as a container for a fifth strain, should you be that lucky.
Read More

​Former New Mexico Gov. Gary Johnson, a likely 2012 Republican presidential candidate, is already known as a supporter of cannabis legalization, and has said he smoked pot during his youth. “I never exhaled,” he joked recently. But now Johnson has admitted publicly for the first time that he smoked marijuana more recently — from 2005 to 2008 — for medicinal purposes.

“It’s not anything I volunteer, but you’re the only person that actually asked about it,” Johnson told reporter John McCormack of The Weekly Standard. “But for luck, I guess, I wasn’t arrested,” said Johnson, who was Governor of New Mexico from 1994 to 2002.
Although marijuana was illegal for medical or any other purposes in New Mexico until 2007, Johnson said he needed cannabis after a 2005 paragliding accident in Hawaii. His sails got snared in a tree, and Johnson fell about 50 feet to the ground, he said, suffering multiple bone fractures.
“In my human experience, it’s the worst pain I’ve ever felt,” Johnson said.
“Rather than using painkillers, which I have used on occasion before, I did smoke pot,” Johnson said, “as a result of having broken my back, blowing out both of my knees, breaking ribs, really taking about three years to recover.”
Read More

​​Former New Mexico Gov. Gary Johnson could bring the issue of marijuana legalization into the 2012 Republican presidential primary if he decides to run.

“The issue of marijuana legalization is already an attention-getter,” Johnson told Marc Caputo of the St. Petersburg Times after a visit to Florida last week to test the political waters. “And you can’t shy away from it. I have to defend it. I have to defend the position.”
According to Johnson, marijuana is less harmful than alcohol, and arresting and locking up pot smokers costs too much, both in terms of civil liberties and for the taxpayers.
Read More

​Another Seattle Hempfest has entered the history books, and this 19th gathering of the tribes was another great one.

Among the highlights of the event — you know, other than the obvious ones, like 4:20 at the Seeley Stage — were the Hemposium discussion panels including marijuana policy experts from across the country.
For policy wonks and committed marijuana activists, some very exciting quotes came out of those sessions.
Here are five of the best.
Read More 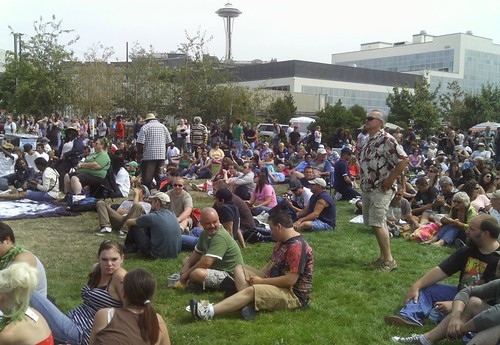 Sometimes things are just perfect, and that’s the way the weather was at Seattle Hempfest on Saturday. It was a bud-iful day in the park!
All photos by Steve Elliott/Reality Catcher unless otherwise noted
​
Read More