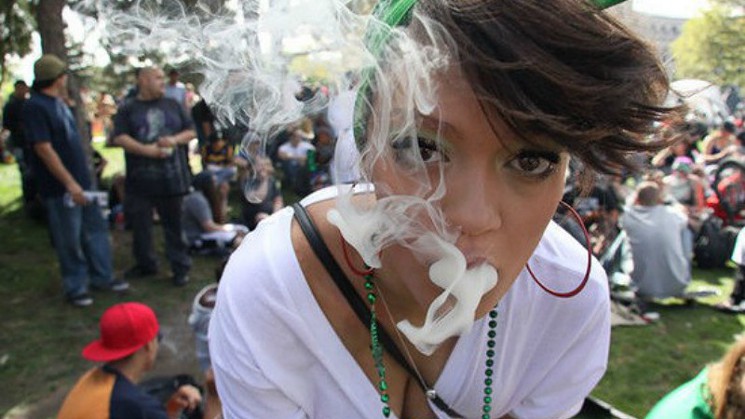 In a recent interview, University of Denver law professor Sam Kamin outlined three ways Donald Trump could shut down state-legal marijuana — a prospect that has raised increasing levels of concern among cannabis reformers since the president-elect’s nomination of pot-hating Senator Jeff Sessions as U.S. Attorney General.

Erik Altieri, executive director of the Washington, D.C.-based National Organization for the Reform of Marijuana Laws, shorthanded as NORML, acknowledges that such worries are prevalent right now, and he doesn’t dismiss them out of hand. Indeed, he encourages NORML supporters and anyone who objects to the federal government treating marijuana as a substance on par with heroin to be prepared for a crackdown, even if one has not yet been announced.

Big-money investors are starting to see the upside in going “green.”

Following Microsoft’s recent partnership with Kind Financial, Google may want to go green as well. John Lord, CEO of LivWell, a large vertically-integrated producer in Colorado, said the search giant had reached out to him. (On The Cannabist Show, Lord discusses the implications of industry-hated tax provision 280E.)

Venture capitalists are shaking off the stigma. The Bloomberg article contains the tidbit that New York’s health department uses Oracle software to monitor its MED program.

Jim Hagedorn, CEO of publicly-traded Scotts Miracle-Gro, said he want’s to “Invest, like, half a billion in the pot business…It is the biggest thing I’ve ever seen in lawn and garden.” Since 2015, Scotts has spent $255M acquiring companies that make soil, fertilizers, lighting and hydroponics. He pledges to invest $150M more this year.

Stock in Insys Therapeutics jumped after the FDA approved its cannabis-derived drug.

According to the Tampa Tribune, there are  15,000 businesses nationwide  providing ancillary products and services to the cannabis industry.
The Verdes Foundation is the  highest-grossing producer  in New Mexico. (The state’s MED industry is non-profit.) MED dispensaries in Hawaii can open next week but  most aren’t ready .
NORML executive director Allen St. Pierre reportedly resigned after 24 years. He will remain on the organization’s board. His interim replacement is treasurer Randy Quast.
Excerpted from the newsletter WeedWeek. Get your free and confidential subscription at WeedWeek.net.
​NORML Women’s Alliance Calls For Grand Jury Investigation
Several legal, qualified medical marijuana patients recently have had their children taken away by the Butte County, California Children’s Services Division. In response, the NORML Women’s Alliance last Friday put forward a complaint to the Grand Jury of Butte County requesting an investigation into the County Children’s Services Division for the agency’s perceived and widespread misconduct.
“The questionable actions and perceived misconduct by the Butte County CSD has compelled us to file an official request for an investigation by the Grand Jury in Butte County,” Sabrina Fendrick of the NORML Women’s Alliance told Toke of the Town from Washington, D.C., on Thursday afternoon.
Read More
​By Jack Rikess
Toke of the Town
Northern California Correspondent
The NORML Women’s Alliance is looking for many good women.
According to most every poll, cannabis use by mainstream America is on the rise, except for women — their numbers are stagnant. Men are 10 to 16 percent “higher” in their support of legalization and medical marijuana.
The Women’s Alliance is a on a quest to change that.
This coming weekend I have the pleasure of tagging along with NORML Women’s Alliance as they bring their message to the High Times 2012 Medical Cannabis Cup in Los Angeles. Since its inception a few years ago, from New Jersey to the West Coast, the Women’s Alliance has been reaching out to women via networking groups, parties, movie screenings, conferences and where I first met them, in the streets of San Francisco, marching and protesting.
When Obama last visited San Francisco, there was a huge demonstration organized by the medical marijuana community to protest the federal crackdown, a complete about-face by the administration, forcing the closure of California dispensaries and blocking safe access to medicine.
Read More
​Editor’s Note: Toke of the Town recently called to task Executive Director Allen St. Pierre of the National Organization for the Reform of Marijuana Laws (NORML) for statements regarding the medical marijuana industry.
In the interest of presenting both sides of the controversy, here is a response from NORML Board Member Norm Kent.
Don’t Blame NORML
By Norm Kent
“Of all the tyrannies a tyranny sincerely exercised for the good of its victims may be the most oppressive...” ~ C.S. Lewis
It is time to responsibly address the issues raised by Allen St. Pierre in his controversial comments about the medical marijuana programs in California.
First, that requires putting aside those personal issues that have foolishly fractured the dialogue and emotionalized the discussion on the NLC list-serve.  Let’s excise those straightaway.
In short order, we know Mr. St. Pierre has always protected the reputation and stature of NORML, governing the organization with endless energy and managing it with integrity. In his capacity as Executive Director, he has worked tirelessly, sacrificed financially, and committed himself exhaustively to keep the organization alive and afloat. Allen has been a nationally recognized and responsible voice for marijuana law reform for decades. It is an affront for anyone on the Board of Directors or within the list-serve to suggest anything else. Those who have done so do a disservice to NORML and are being disingenuous and unfair to Allen.
Having said that, let’s start the discussion by assuming the worst; that the statements Mr. St. Pierre made about medical marijuana were inappropriate politically and hurtful personally to many in California working for reform. Were they irreparably damaging or thoughtful and provoking? I suggest the latter. I submit his comments wisely and prudently pushed the needle- moving us in a new direction that may yet prove to be smarter.
Read More
​NORML Executive Director Allen St. Pierre has called the medical marijuana industry a “legal farce” and “largely a sham” in an article which hit the web yesterday, creating a backlash among NORML’s many supporters (quite a few of whom likely just became former supporters) in the medicinal cannabis industry.
How many times must we repeat this? Attacking medical marijuana is not a good legalization strategy.
The sadly predictable outcome is that for the next umpteen years, every single time a medical cannabis initiative is raised in any state, the opposition are going to drag out St. Pierre’s ill-considered words as ammunition. “Why are you sitting there trying to tell us this state needs a medical marijuana law when NORML itself has admitted medical marijuana is a fraud and a sham?”
The piece, published by Steve Bloom on CelebStoner (according to NORML’s “Radical” Russ Belville, from private listserv emails sent last October, and without St. Pierre’s permission), is really unfortunate, and is a huge, huge blunder on NORML’s part. The pity of it is, it’s not just NORML that’s going to have to pay for St. Pierre’s mistake — it’s the medical cannabis community which he apparently so disdains.
Read More

​We’re two months into a confusing crackdown by the federal Department of Justice on medical marijuana dispensaries, and California Assemblyman Tom Ammiano is expected to meet soon with the U.S. Attorney’s office.

The private meeting is expected to take place next week between Ammiano (D-S.F.) and federal prosecutor Melinda Haag, the U.S. Attorney for the Northern District of California, reports Dan Aiello at The Bar Area Reporter.
The decision by Haag to meet with Ammiano comes just a week after U.S. District Court Judge Saundra Brown Armstrong ruled against three Bay Area medical marijuana dispensaries, one of the dispensary’s patients, and another’s landlord.
“U.S. Attorney Haag’s office has responded to our request and Assemblyman Ammiano will be meeting her sometime next week,” said Quintin Mecke, Ammiano’s communications director.
Participants at the meeting have not been confirmed; “no other elected official[s]” will be there, according to Mecke. “This meeting is on behalf of our office,” he said.
Federal prosecutors have threatened dispensaries with eviction, landlords with property seizures, and both with imprisonment. Scattered raids have been reported, with patient records being seized at one dispensary in Sacramento.
Read More
​​​​​​By Jack Rikess
Toke of the Town
Northern California Correspondent
The fabled Emerald Cup is returning to the legendary Mendocino spiritual sanctum, Area 101, this Saturday. As the blurb says, “Proclaimed by Rolling Stone Magazine,’ as the premiere competition in America.'” And they’re not kidding.
The Emerald Cup, “the world’s only outdoor organic cannabis competition,” first lit up on the scene almost a decade ago, with the initial competition bringing in 22 entrees to be judged. Last year, the entries almost reached 150.
But that’s just pot talk. What’s cool about the Emerald Cup? It is so much more than your average medical cannabis bake-off.
Read More
​The Anatomy of a Memo
​By Jack Rikess
Toke of the Town
Northern California Correspondent
In a incredibly chicken-shit way, the Department of Justice did a news dump last Friday night after all the big news services had gone to bed, releasing a memo meant to “clarify” its position whether marijuana should remained classified as a Schedule I drug, which means that it has no medicinal benefit.
Big surprise! The DOJ said the scheduling remains the same. “Not so fast, partner, nothing changing as far as we’re concerned.” Marijuana is to remain classified as a Schedule I drug because of its “lack of medicinal benefits.”
My first question is could there be a conflict of interest with a agency like the Department of Justice that is home to the DEA, Bureau of Prisons, National Drug Intelligence Center, Organized Crime Drug Enforcement Task Force, Office for Immigration Review, U.S. Marshals Service, Interpol, FBI, and the ATF?
Are these really the guys we want deciding whether marijuana’s good for you or not?
Is it really a surprise then when they said, “No?”
Read More

​Friday marks an unhappy anniversary in hemp history. On April 29, 1911, Massachusetts enacted the first state law making it illegal to sell or possess cannabis without a prescription, becoming the first U.S. state to institute marijuana prohibition.

Violators of the new law were subject to a $100 fine and up to six months in jail, and just being present in the same room with marijuana could get you three months, according to cannabis historian Dale Gieringer of California NORML.
Ironically, marijuana was merely collateral damage of the Massachusetts law, which was aimed primarily at other “hypnotic” drugs such as opium, morphine and heroin. Abuse of opiate painkillers had become a concern among reformers and temperance advocates in the early 20th century, and cannabis was added to the list “for the sake of completeness,” since it was also a hypnotic palliative commonly found in pharmacies.
“This incidental decision would turn out to have far-reaching consequences, aptly illustrating the dangers of governmental misjudgment in matters of drug regulation,” Gieringer said.
Interestingly, the Massachusetts law specifically permitted medicinal use of cannabis with a prescription; the medical value of “Indian hemp” was widely acknowledged at the time.
“Only in 1937 was medical cannabis suppressed at the insistence of federal narcotics boss Harry Anslinger, whose last-century ‘Reefer Madness’ policy sadly remains with us today,” Gieringer said.
Read More
1 2 Next