​There are so many books relating, directly and indirectly, to the world of cannabis that it can be tough to know which ones to buy.

With a plethora of volumes on growing, using, concentrating, and cooking with cannabis, as well as tomes related to the culture and lifestyle associated with it, the reader with an adventurous streak can stock a library or fill an e-reader.
But beyond the grow books (I recommend Rosenthal, Cervantes and West) and the basic histories of marijuana (I recommend mine), books which are more about the (counter-) culture surrounding weed rather than weed itself are harder to pigeonhole and, thus, often harder to find.
Here are five of the best books on the culture of marijuana that came to our attention this year.
The Audacity of Dope by sports writer Monte Dutton is unusual in that Dutton has, until now, been well known and celebrated for his spin on NASCAR racing. Dutton’s controversial new novel features a man who becomes a hero against his own wishes.
Riley Mansfield, the lead character, isn’t a conventional hero. He writes songs for a living, smokes pot for recreation and basically just wants to live and let live. But when he foils an apparent terrorist plot he is thrust into the spotlight, which is exactly where he doesn’t want to be.
Suddenly, everyone wants a piece of the marketable new “hero,” including both major political parties. They aren’t willing to take no for an answer, partly because it’s an election year and partly because what happened on the plane may be more complicated than it appears.
Mansfield and his girl Friday, Melissa Franklin, lead the government and the Republicans on a sometimes merry, sometimes painful, sometimes lucky chase. Along the way, they stumble across some unlikely friends — a Democrat strategist, a Rolling Stone writer, a pair of sympathetic FBI agents — and also some ruthless enemies.
Theirs is a love affair of sex, drugs and country-folk set against a backdrop of political scheming, hidden agendas and an unraveling plan to keep control of the government.
The Audacity of Dope by Monte Dutton, Neverland Publishing Company LLC [2011], $16.95
Read More

SCIENCE VS. STIGMA-TRAILER from Dave Wilkinson on Vimeo.

The new documentary film Science vs. Stigma does a wonderful thing: It puts a human face on some of the collateral damage from the War On Drugs. The film does this by allowing medical marijuana patients to share their struggles to safely access an unjustly demonized medicinal herb that helps them.

True stories and scientific research reveal the difficult lives of patients who require the ancient medicinal plant, cannabis, which is now legal in some states, but still so demonized that it cannot even be named in an advertisement.
The medicinal components of cannabis have been shown to be effective in treating dozens of conditions, but patients who are ill and disabled are still senseless persecuted and socially stigmatized.
Read More

​If you’re entering the increasingly crowded market of marijuana grow books, you’d better be good. There’s a plethora of cultivation guides available, from some of the biggest names in cannabis culture, and if you don’t want to get lost in the crowd you’ve got to shine.

Shine is exactly what outdoorsman Tommy McCarthy does in his book Growing Marijuana: How To Plant, Cultivate, And Harvest Your Own Weed. If I’m going to be taking cultivation advice from someone, I want that they should be as passionate about pot as am I, and McCarthy bountifully proves himself in this delightful book.
“…[P]lants your pot garden produces with seeds culled from a bag of street marijuana may vary noticeably because the plants they came from were of different species and strains,” McCarthy writes. “I actually kind of like this grab bag of mixed greens, because you never know when you’re planting just what will come up — as I stated at the beginning of this book, personal-use growing should be fun.”
Read More

“I am convinced that there are genuine and valid levels of perception available with cannabis (and probably with other drugs) which are, through the defects of our society and our educational system, unavailable to us without such drugs.”
~ Carl Sagan
Read More

​Grandparents, those members of society who’ve had the most time to accumulate knowledge, experience and wisdom, overwhelmingly favor the legalization of marijuana, according to a new poll.

GRAND Magazine, which calls itself “the only magazine for today’s grandparents,” on Thursday released the results from a poll question which appeared in their March/April issue: Is it time to legalize marijuana? A whopping 85 percent responded that yes, pot should be legalized.
Even readers who don’t use cannabis themselves argued that it is hypocritical to outlaw pot when cigarettes, alcohol and fatty foods are legal, but account for so many health issues and deaths.
They pointed out that cannabis is used to treat symptoms such as pain and nausea, and that in some states it is legal for dispensaries to sell medical marijuana.
Read More

When a ragtag band of hippies set out in a 20-bus caravan from San Francisco in 1970 looking to reinvent society, they rode into the history books with a psychedelic, very weird yet very American tale of idealism and do-it-yourself utopia.
And right there in the midst of things was young writer Melvyn Stiriss. Tom Brokaw once said of himself, “In the sixties, I was a young up-and-coming reporter, and I came right up to the edge of what was happening, and I backed away.”
“At that time, I too was a rising young journalist,” Stiriss said. “I came up to that same edge as Tom, only I went Wheeee! Over. And that has made all the difference.”
“The fact that I am a trained, experienced journalist placed me in a situation that was both enviable and uniquely challenging,” Stiriss said. “I never entered the hippie world with the idea of writing about it. I was never just a fly-on-the-wall, unattached observer. I was in deep, sometimes over my head.”
Read More 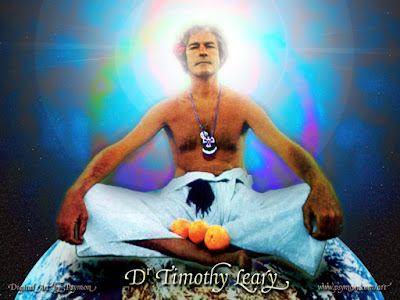 The great Timothy Leary would have been 90 years old today.

Timothy Francis Leary (October 22, 1920 – May 31, 1996) was an American writer, psychologist, futurist, modern pioneer and advocate of psychedelic drug research and use, and one of the first people whose remains have been sent into space.
An icon of 1960s counterculture, Dr. Leary is most famous as a proponent of the therapeutic and spiritual benefits of LSD.
As a psychology professor at Harvard University, Leary, along with Dr. Richard Alpert (who later became Ram Dass), performed the famous Good Friday Experiment [PDF]  in which Harvard divinity students were given psilocybin before a church service.
Leary coined and popularized the catch phrase “Turn on, tune in, drop out.”
Rightly called the Galileo of Consciousness, Dr. Leary went public with his observations of the mind made with psychedelic mindscopes and helped initiate a renaissance which is still only beginning to elaborate itself.
Wikipedia: Timothy Leary
The Vaults of Erowid: Timothy Leary
Robert Anton Wilson: Timothy Leary’s Eight Circuits of Consciousness
Read More

​​Hey, if there were only some rock and roll to go with the sex and drugs, this would be a perfect story.

Philip D. Harvey, who heads up the North Carolina company which has been billed as America’s largest provider of sexual products and fuck films, has donated $100,000 to the Drug Policy Action Committee to Tax and Regulate Marijuana, reports Peter Hecht at the Fresno Bee.
Read More

​Dr. Hunter S. Thompson, the legendary creator of Gonzo journalism, would have been 73 years old today.

Thompson’s Gonzo style of reporting involved immersing himself in the action to such an extent that he became the central figure in his own stories.
He was known for his savagely uncompromising writing style; his heroic intake of marijuana, psychedelics, and other drugs; his almost complete contempt for authority and rules; and his anarchist views.
Thompson became best known for his 1971 book, Fear And Loathing In Las Vegas, a strongly autobiographical tale of a drug-fueled Hollywood-to-Sin-City road trip with his 300-pound Samoan attorney.
Read More

​Dudes, if you don’t like the song, maybe you should just change the station. A new proposal by Mexico’s ruling party could result in prison sentences for musicians who perform songs that “glorify drug trafficking.”

The proposed law would mean up to three years behind bars for those performing or producing songs or films that the government deems “glamorize criminals,” reports The Associated Press.
“Society sees drug ballads as nice, pleasant, inconsequential and harmless — but they are the opposite,” claimed Oscar Martin Arce, a National Action party Member of Parliament.
There are so many of the drug ballads, there’s even a name for the genre — narcocorridos. The songs often describe drug smuggling and related violence, and are increasingly popular among some norteño bands.
Read More
Previous 1 2