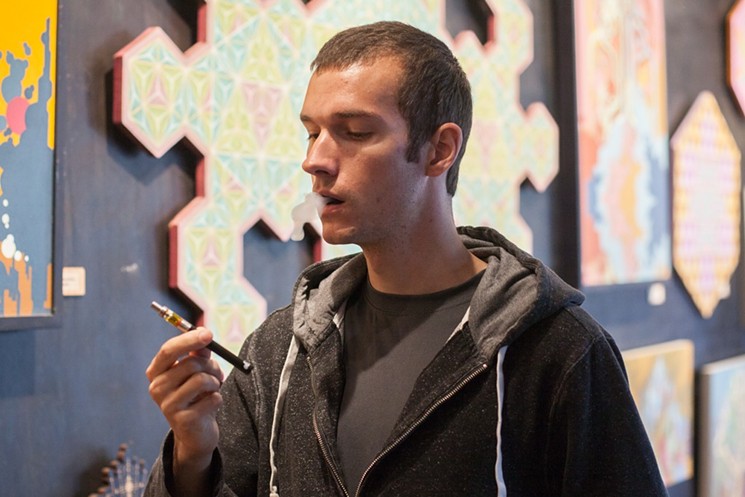 Denver may be a leader in regulating recreational cannabis sales, but it’s hard to say the same about recreational cannabis consumption. Despite allowing medical marijuana dispensaries in town for over a decade and retail pot shops for nearly five years, Denver’s attempts to address social pot use have fallen just a few degrees above flat.

To be fair to Denver, the rest of Colorado isn’t exactly diving in, either, and neither are most of the other states legalizing the plant. Denver was the country’s first city to approve a program for issuing consumption licenses to qualified businesses, and one pot lounge is up and running, with another approved business on the way — but the program has its limitations. Approved by voters in 2016, the social consumption initiative was tweaked during its lengthy implementation process, with disputed location qualifications and restricted revenue streams added, to the dismay of the initiative’s proponents.

Hearing at 10 a.m. Thursday may decide whether Oakland’s challenge to federal authority can proceed
The Obama Administration will be going toe-to-toe in federal court Thursday at 10 a.m. with the City of Oakland and California’s largest medical marijuana dispensary, Harborside Health Center.
U.S. Attorney Melinda Haag filed forfeiture proceedings in July against Harborside’s landlords to force the dispensary to close its two locations in Oakland and San Jose. Then, in October, the City of Oakland filed its own legal action against Haag and her boss, U.S. Attorney General Eric Holder.
Read More

Judges’ Packs are available for the sixth annual Patient’s Choice Medical Cannabis Competition in San Francisco, an event which provides Bay Area medical marijuana patients a sampling of the strains they are likely to find available at local dispensaries following the 2012 outdoor harvest season. The competition also provides cultivators, collectives and co-ops with a chance to show off their best weed to patient/judges with highly refined tastes.

Each Judges’ Pack (which costs $300 and is limited to California medical marijuana patients 18 and older) will include two tickets to the awards ceremony, one ballot, and cannabis totaling more than an ounce, made up of small samples of flowers, concentrates, and edibles.
Last year, Judges’ Packs came with 34 one-gram samples of medical cannabis, 10 quarter-gram concentrate entries, and 10 types of medibles, reports David Downs at SF Gate. Humboldt Royal Kush, an outdoor-grown indica from EarthGreenCali farms in Humboldt County, took first place, as reported here last year by Toke of the Town Northern California Correspondent Jack Rikess. It was grown in full sun with no added nutrients; the grower told attendees the plant got all its food from a “secret soil mix,” pH-balanced water, and molasses.
Read More
By Jack Rikess
Toke of the Town
Northern California Correspondent
I had the privilege and honor of attending a conference this past week in San Francisco titled, “Cannabis In Medicine.” The symposium brought together all levels of health care workers: Doctors, nurses, researchers and other medical professionals, mostly unfamiliar with marijuana as a medical treatment, gathered in one room to receive straight, sober information. We were treated to the results of data, case studies and clinical trials conducted using cannabis therapy.
Read More

​A well-known medical marijuana patient and advocate suffering from a terminal brain condition was escorted out of a San Francisco hospital Monday night for using a cannabis vaporizer inside the facility, according to media sources.

Angel McClary Raich, who said she believes she has about a year to live, was at the University of California San Francisco (UCSF) Hospital to receive a brain scan, reports the Oakland Tribune. A resident of Oakland, Raich suffers constant severe pain, according to her website.
Read More

​In an unprecedented analysis of sales tax revenue from the sale of medical marijuana at city dispensaries, the San Francisco controller’s office has estimated annual sales of medicinal cannabis at $41 million.

San Francisco’s roughly two dozen licensed collectives must pay the city’s 8.5 percent sales tax rate, coming from California’s 7.25 percent sales tax with a local one percent sales tax going to S.F.’s general fund, and a .25 percent sales tax that goes to other areas like transportation, reports David Downs at the East Bay Express.
Counting the most recent reporting period — which ended with the third quarter of 2011 — a year’s worth of general fund revenue from sales tax on medical marijuana totals “just over 410,000,” said Curt Fuchs, senior economist in the controller’s office, East Bay Express reports.
Since that figure is one percent of sales, that means S.F. dispensaries sold about $41 million worth of marijuana in a year, “which equals a $50 (or about an eighth of an ounce) dispensary purchase for every person in the city,” Downs reports.
Read More

​In the latest iteration of their on-again, off-again approach to the issue, San Francisco city officials decided on Wednesday afternoon to indefinitely suspend the city’s medical marijuana dispensary licensing program, according to the Department of Public Health.

Permits had been on hold since last fall, after a state appeals court case halted similar permitting programs across California, reports Chris Roberts at SF Weekly. That case was appealed to the state Supreme Court, and during the appeal, permits could resume being processed, a spokesman for the City Attorney told SF Weekly last week.
Read More

​The founder and president of The Green Cross, a medical marijuana delivery service in San Francisco, responded on Monday to the recently announced federal crackdown on cannabis dispensaries, saying the collective “will act no differently today or tomorrow, than we did a month ago.”

“Following the release of the Cole Memo earlier this summer, the United States Department of Justice announced their intention to ‘crack down’ on medical cannabis dispensaries across the state of California,” Reed told members of The Green Cross collective in a Monday email. “At a press conference last Friday in Sacramento, US Attorneys reminded us that federal law prohibits the use and distribution of cannabis for any purpose regardless of state law, and, outlined heightened enforcement techniques tailored for each of California’s US Attorney districts.
Read More
​​By Jack Rikess
Toke of the Town
Northern California Correspondent
​The man under the faded Giants cap wiped his forehead again for about the thousandth time. It was hot and it was late. Harvey should have been here 30 minutes ago.
The duffle bag in the back of his ancient Charger ticked like a tell-tale bud wanting to get out. The man wanted to go. He had pressing business at 2:30 that he couldn’t be late for. Then there was this other guy to hook-up with.
His long mane fell out of the cap as he ran his hand through that swamp of molted hair looking for dust on the horizon. It was a little before 2 and the temperature was deep into the red.
Between the LB’s in the trunk, the Charger’s engine actually ticking under the midday sun, and the clock in his head counting off like a nasty verbal egg timer telling him he needs to get moving if he wants to make his hook-up and his 2:30, he was getting nervous — for a man who doesn’t get nervous. The man would have started pacing if it wouldn’t have looked too suspicious.
Read More
1 2 Next