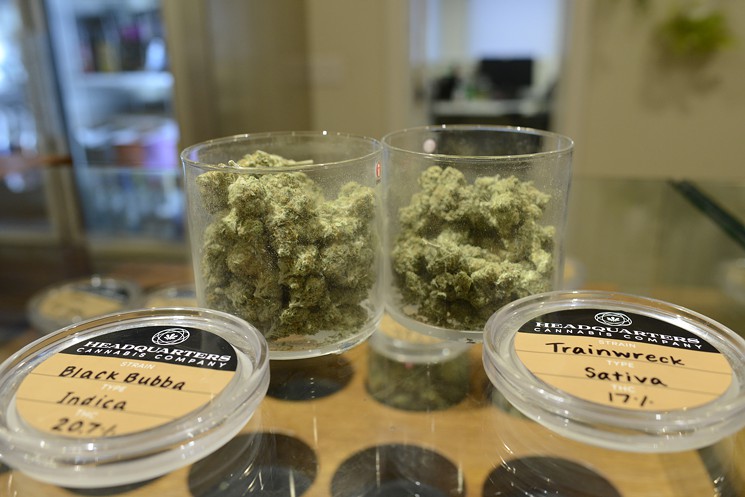 Denver has come a step closer to allowing late-night dispensaries.

Under state law, dispensaries can stay open until midnight, as they do in Edgewater and Glendale. For the last several months, Denver City Council’s special marijuana committee has discussed extending those hours. At a meeting on April 3, councilmembers settled on 10 p.m. as a closing time, which mirrors Aurora rules, and moved the proposal to the full council.

Philadelphia police have their own agenda, and don’t care about what the people or their city council has to say. In just one month after city council approved a measure decriminalizing small amounts of pot, cops arrested 264 people for pot possession according to data pulled by Philadelphia Magazine.
Granted, the decriminalization measure won’t go into effect until September and the number is down significantly from 476 people one year ago, but it’s clear the cops aren’t giving up their ability to harass people just yet.

Read More
The Chicago City Council on Wednesday voted to decriminalize possession of marijuana with an overwhelming 43-2 vote. The measure was backed by Mayor Rahm Emanuel.
Under the new ordinance, police officers in Chicago, the third-largest city in the United States, can issue a written violation for possession of 15 grams or less of cannabis, rather than making an arrest, reports Reuters. People who are caught with under half an ounce of marijuana will now face fines between $250 and $500, instead of being arrested.
The measure will help raise revenue for the city, according to supporters, as well as saving money on enforcement and incarceration and freeing up police to pursue more important matters. Unfortunately, officers would still have the authority to arrest people, even for small amounts of marijuana, rather than ticket them. Does anyone really believe that a few rabidly anti-pot assholes in the police department won’t give the whole force a bad name?
Read More

​When it comes to cannabis law reform, what’ll it be, Washington? Your choices are YEP and NAW. (The respective acronyms stand for Yes End Penalties and New Approach Washington.)

The new kid on the block, Washington state cannabis reform group Yes End Penalties Washington (YEP WA), will announce a new marijuana legalization drive at 11 a.m. Thursday on the North Steps of the Legislative Building at the State Capitol in Olympia.
Initiative sponsor and Lacey City Councilman Ron Lawson will announce “Initiative to the Legislature 505,” which would remove cannabis-related civil and criminal penalties for adults in Washington state. Supporters of I-505 will speak at the event.
Yes End Penalties WA is inviting news media and interested members of the public to attend and compare YEP to NAW.
“Removing marijuana penalties will not conflict with federal law, avoiding preemption and empowering the people of Washington state to step away from the fear of speaking for cannabis reform and directing their legislators to create fair and evenhanded regulation that benefits the public, rather than special interest groups and based on fact and science, not misinformation or ‘reefer madness’ propaganda,” said YEP’s Don Skakie.
Read More

​Ellensburg, Washington has joined the short, but growing, list of cities in the Evergreen State which have decided to allow medical marijuana collective gardens.

On Monday night, the city council unanimously adopted an emergency ordinance on the issue to allow patients to grow cannabis collectively for medical use, reports Aaron Hilf at KNDO.
However, the same emergency ordinance which allows collective marijuana gardens also places a six-month moratorium on medical cannabis dispensaries.
The collective marijuana gardens must be indoors and at least 300 feet from schools, along with other zoning regulations.
“We really wanted to be able to move quickly so that if someone did want to come forward there was a framework within the city, an application process within the city, and zoning within the city that allowed them to become a collective,” said Mayor Bruce Tabb.
For an eminently reasonable $25 permit fee, along with a doctor’s medical marijuana authorization, patients in Ellensburg can now get together and grow cannabis for medicinal use.
Read More